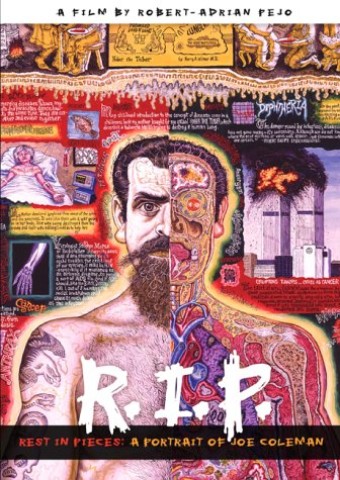 Joe Coleman is a very broad subject. He is an artist whose media range from Shock Art to bloody performance, from underground comics to sermons from the pulpit and punk shows. He is a self-portrayer who equates himself with Jesus Christ on the one hand and with the Anti-Christ on the other – due to his own initials.

Coleman can be viewed as a radical thinker, and as a philosophizing nihilist whose apocalyptic theories ruthlessly describe a society fixated on death, a humanity which has long since ceased to obey any rules other than self-elimination. R.I.P. – Rest in Pieces is a film portrait of this man, a film which associates the life of the artist with his environment, New York City. Coleman – who, incidentally, accounts Charles Manson and cartoonist Robert Crumb as soul brothers – defines planet earth as a cancer culture, whose capital cities function as tumors, which continually develop new metastases (cancerous growths).

The expression of pain in his innermost being, in order to visualize and formulate the unspeakable, this is what Coleman’s work is about and here, he and Hieronymus Bosch, with whom Coleman enjoys being compared, are in fact not dissimilar. In public places, he ignites explosives tied on to his body; he prophesies the end of the world and proclaims the serial killer to be an artist who has discovered a new form of communicating pain. Abnormities, deformations and deathblows proliferate throughout his paintings, which he produces with incredibly meticulous attention to detail, using magnifying glasses and extra fine paintbrushes.

R.I.P. is a documentary film of the (self-)depiction of a manic moralist, who will very likely soon be promoted from subculture to established artist status: It is the portrait of an American actionist who diagnoses (and exorcizes) the ills of society in himself – and who uses his extremism and contradictions to sketch a remarkably clear picture of the world.