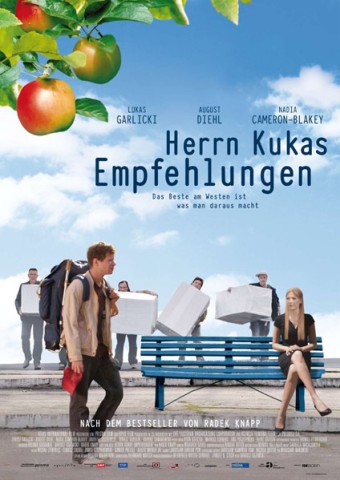 One fine day, young Waldemar makes the decision to spend his summer in the West. He gathers some travel advice from his neighbor, Mr. Kuka, who offers assorted tips on how to behave in the West and why one should never return from a trip with a T-shirt saying “How can I serve you?”. On the bus to Vienna, vague doubts start creeping into Waldemar’s head as to how realistic Mr. Kuka’s advice was.

The bus resembles an upside-down refrigerator and his fellow passengers don’t look like tourists at all, especially since their only reason for traveling seems to be smuggling enough cigarettes and vodka across the border to last a small city for a year. Having arrived in Vienna, Waldemar discovers that his trip was well thought through by someone other than himself. Unaware of it, he has smuggled a precious coin across the border into the West for Mr. Kuka. Also, the recommended hotel turns out to be a park bench at the Belvedere Gardens.

But our young protagonist is not deterred, even when his Polish compatriots proceed to rip him off at the illegal worker’s pick-up site, or when his kleptomaniac roommate tries to coax him into committing an elegant little bank robbery, or when he has his cherry popped for his birthday: he tackles every hurdle the city has in store for him using a peculiar mixture of curiosity, naïveté, pluckiness and charm. Despite all the curious, wonderful encounters and experiences our young lucky duck at some point asks himself what the reason for his journey might be. But he wouldn’t be Waldemar if an answer didn’t come to him in time – in the guise of his eccentric employer’s mysterious lover …